Posted About Three Years Ago by Rhonda Daniel

On May 6, the senior members of the Timpson High School Band and their directors set out on an adventure to New York City.  They were able to see many sights in the city, such as The World Trade Center, Times Square, The Brooklyn Bridge, Central Park, China Town, Little Italy, The Metropolitan Museum of Art, Trump Tower, and much more!  The group stayed in an apartment in Manhattan and traveled throughout the city using the subway. 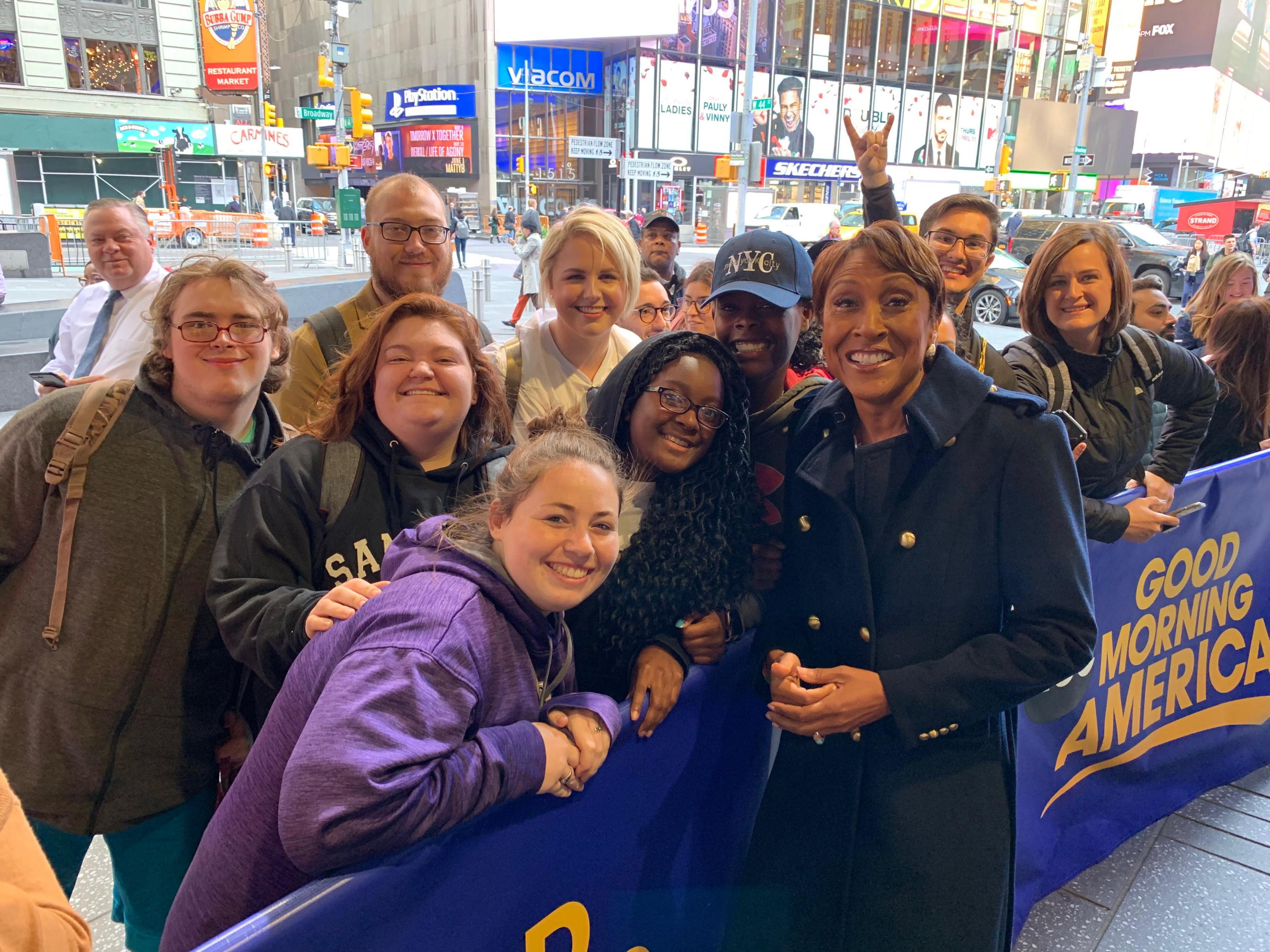 On Wednesday morning, May 8, things took an unexpected turn.  Timpson Band Director, Rhonda Daniel, said, “This is a story none of us will soon forget.  We went to Times Square at 6am to visit Good Morning America.  We didn’t have tickets to be in the studio audience, we were just hoping for 15 seconds of air time if one of the anchors came outside to the street.  We wanted to wave to our parents so they could see us having a good time in the Big Apple!  We could see Robin Roberts inside getting ready to start the show.  She noticed us, smiled, and even waved a few times, which we thought was very neat!  After filming the first segment of the show, Robin Roberts came outside to the street to meet us.  She posed for a few pictures with us, and was thrilled to learn that we were directors and members of a high school band.  She told us about how she played the tenor saxophone in high school and described her band uniform to us, which she said she wore with pride.  She said she had an immense amount of respect for band students and educators.  Robin asked me which song was our favorite to play.  Knowing that Katy Perry was a guest on the show, my obvious answer was, “‘Firework’ by Katy Perry.” 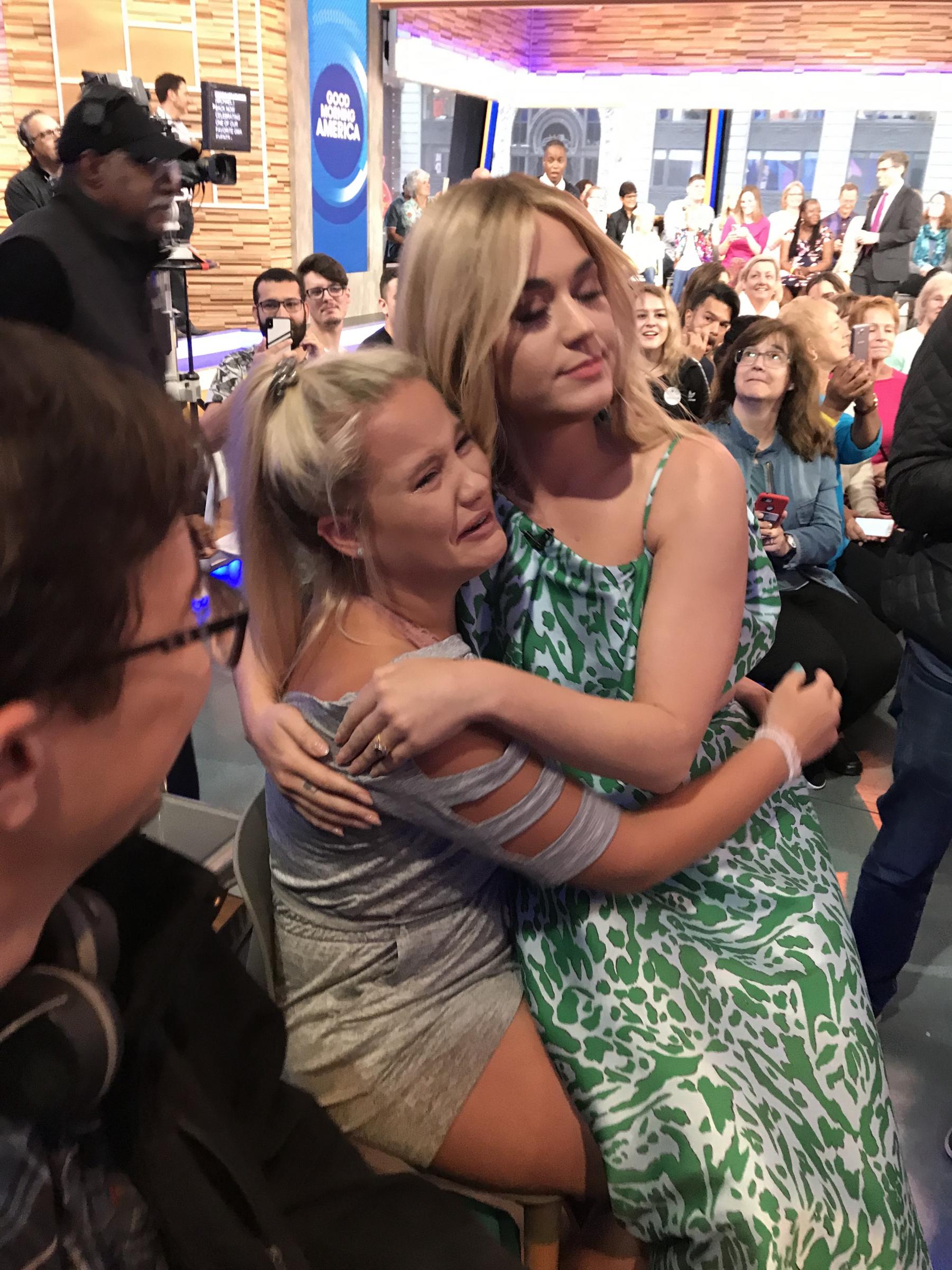 Robin then told us she was going to get us inside the set of GMA.  We were escorted by security to a spot behind the cameras to watch Robin, Michael Strahan, and George Stephanopoulos continue filming.  At a commercial break, she introduced us to Michael Strahan.  Michael is from Houston, so we talked with him about Texas and football and took a few pictures with him.  Next, we were escorted upstairs where a spot was made for us near the studio audience to watch the remainder of the show.  Our students are huge fans of singer and American Idol judge Katy Perry, so this was just thrilling for our whole group.  When Katy’s interview was over, Robin Roberts brought her over to us.  Katy immediately locked eyes with one of our seniors, Cassidy Clifton.  She could see Cassidy’s excitement, so, in true Katy Perry fashion, she sat right down in Cassidy’s lap and consoled her as she cried!  Katy pretended to cry some and even kissed Cassidy on the cheek!  This all happened during a commercial break, but it did end up on GMA’s Instagram and Facebook stories.  When Katy left the set, Robin Roberts posed for a few more pictures with us and, again, told me how much she respected what educators do for their students.  The whole experience can be summed up in one word… surreal.” 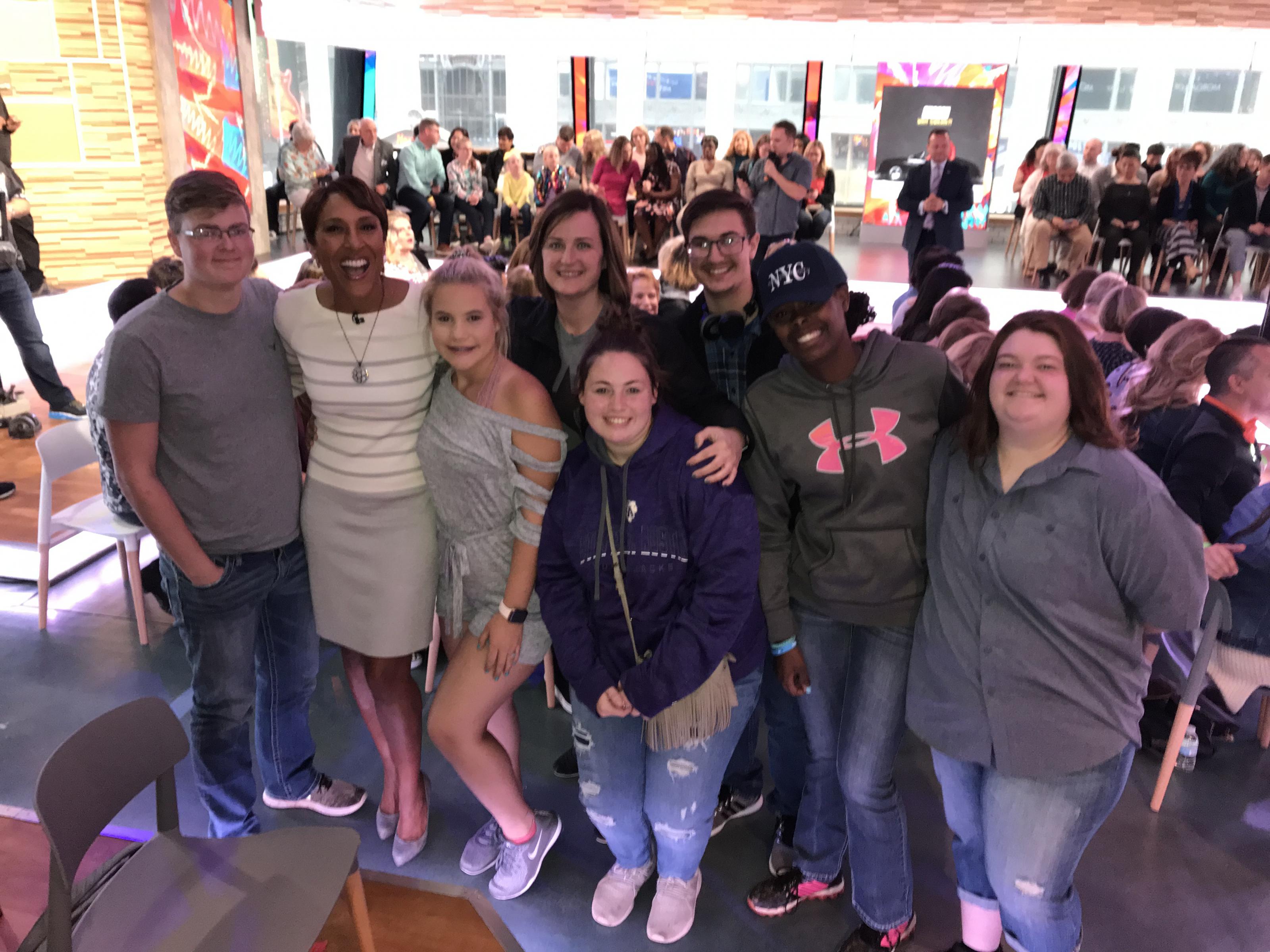 For these seniors, the quest for 15 seconds of fame turned into an experience they will carry with them forever.  New York City was unforgettable and Good Morning America was the “icing on the cake.”  The common tie between the Timpson Band seniors and Robin Roberts was, band.  Throughout the rest of their lives they will continue to come in contact with “band people” and feel an instant connection to them…. the rehearsals, the performances, the uniforms, the trips, the friends, the memories… we’ve all had  the same experiences and can relate to each other in a way that is indescribable.  The whole trip to New York City was made possible because of these seniors’ hard work and long-time commitment to this organization.  Congrats to the 2019 Timpson High School Band Seniors! 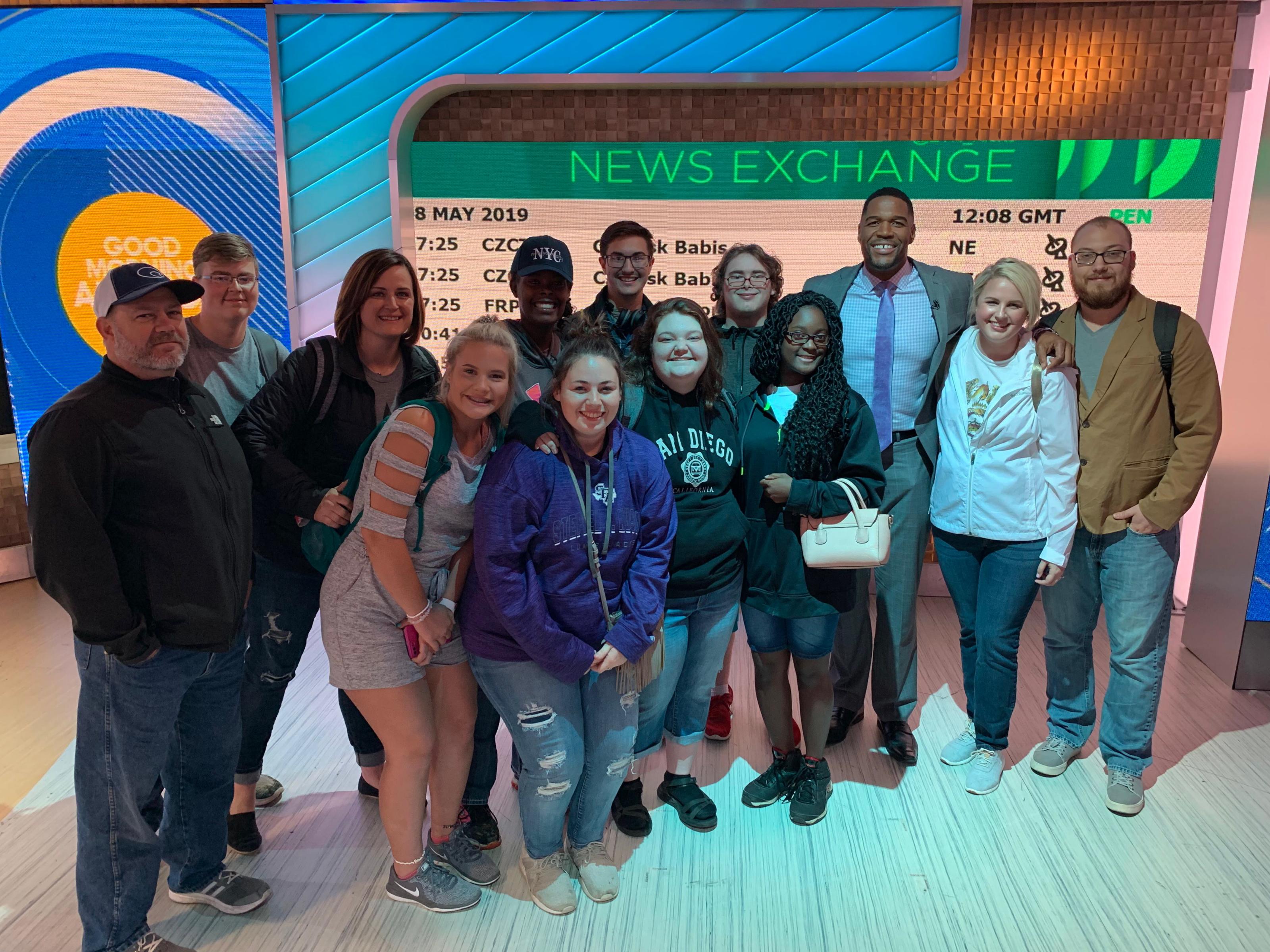 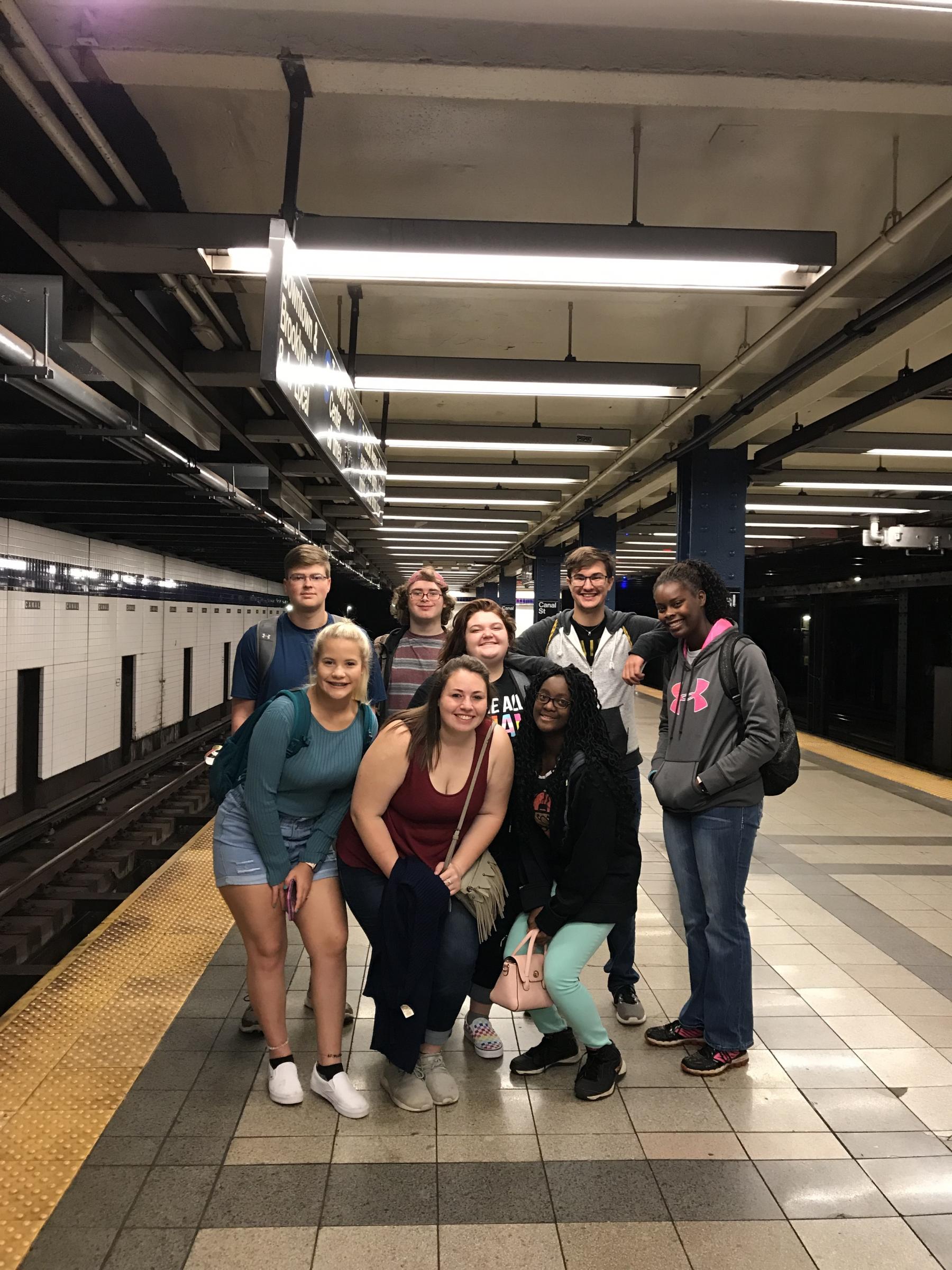