Posted About Five Years Ago by Tom Johnson

The weak cold front is just beginning to pass thru the area with a wind
shift to a flow from the NNE at 8mph. Our temperatures will begin to
moderate into the mid 80's once it passes late today with temperatures in
the 60's during the evening hours. The only exceptions will be North of I30
where the temps will be 6-8 degrees cooler.
Next week we will see the temperatures once again building due to a upper
ridge reestablishing itself over us.
No rain for the next 7-10 days due to this dry air HIGH Dome settling in.
This extreme dry condition is setting up to likely be the *driest September
on record for the Upper Deep East Texas Region.* The regional drought
monitor shows increasing drought conditions across the area. A major shift
from September 19 through the 26th into the expansion of the dry conditions
over our area. The winds and hot sun are creating rapid moisture extraction
from our soils, grasses, trees, and plants.
*THE TROPICS* 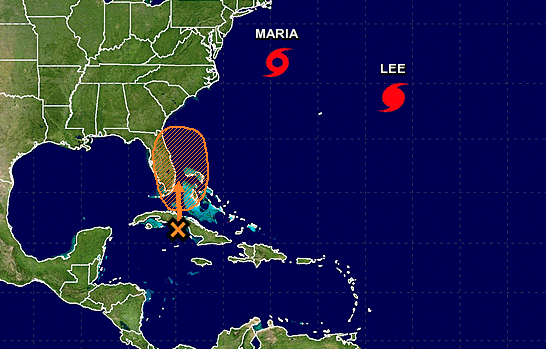 - Hurricane *MARIA* is beginning to decline due to the progression into
the cold waters of the North Atlantic.
- Hurricane *LEE* has joined the major hurricanes of the season, but is
turning North as it follows a line South of Maria and its impact will be
heavy rain & wind in Europe.
- A depression South of Florida is expected to develop into a Tropical
Depression or possibly a Tropical Storm by the weekend. impact the far
Southern Gulf and the main projected course is for  the Eastern Florida
coastal region(orange *X*)
Read All