Posted About Four Years Ago by Panola College

#12 ranked Panola College defeated Paris Junior College three games to zero
last weekend.  Panola earned their first series sweep of a conference
opponent this spring.  Panola’s offense scored a series high 44 runs in
three games while only allowing an average of 4 runs for the weekend.  With
the victories Panola is now 27-5 on the season and 9-3 in conference.
Panola will be back in action this Thursday in Carthage to host Navarro
College.  Game time is set for 2pm.
*4-Hit Day For Boulware Leads Panola College Past Paris*
*Christian Boulware* gave Paris Junior College fits, as he bagged four hits
in Panola College’s 21-3 victory on Saturday. Boulware doubled in the
first, homered in the third, doubled in the fourth, and singled in the
fifth.
Panola took an early lead in the first inning. With two outs in the first
inning Christian Boulware drove in one run when he doubled.
Paris evened things up at one in the bottom of the first inning.  Anderson
drove in one when he singled in the first inning.
Panola took the lead for good with one run in the second inning.  In the
second *Austin Blakeley* hit a ground ball, but one run scored.  Then the
ball
Panola scored ten runs in the fifth inning. The big inning was thanks to a
double by *Colby Price*, a single, a single by *Chandler Morris*, a home
run by *Andrew Pace*, and a double by *Michael Lawson*.
*Logan Bailey* earned the win for Panola.  He tossed five innings,
surrendering three runs, six hits, striking out five, and walking one.
Home runs for Panola came when Pace homered in the fifth inning and
Boulware homered in the third inning.
Panola had 20 hits in the game. Boulware, Morris, Lawson, *Duke Ellis*, *Julian
Flores*, Bailey, Price, and Pace each collected multiple hits for Panola.
*Panola College Completes The Sweep Paris*
An early lead helped Panola College defeat Paris Junior College 11-3 on
Saturday in game two of the double header. Panola scored on a home run
by *Colby
Price* in the first inning, a home run by Lo*gan Berlof* in the second
inning, and a home run by Price in the second inning.
Panola scored four runs in the eighth inning.  Panola’s big inning was
driven by a home run by *Logan Bailey* and a passed ball.
*Taylor Tomlin* earned the win for Panola. He pitched five innings,
surrendering three runs, five hits, striking out three, and walking zero.
Two relievers helped Panola close out the victory.
*Miles **Dunn* threw two innings.  And *Erik Key* would close the door with
a punch out to end the game.
Home runs for Panola came when Price homered in the first and second
innings, *Logan Berlof* homered in the second inning, and Bailey homered in
the eighth inning. Home runs for Paris came when Paris homered in the third
inning and Nemecek homered in the fifth inning.
Panola had 16 hits in the game. Bailey, Berlof, Duke Ellis, *Christian
Boulware*, Price, and *Michael Lawson* each collected multiple hits for
Panola. Price and Bailey each drove in three runs to lead Panola. Panola
was sure-handed and didn't commit a single error. *Colton Oberthier* made
the most plays with seven.
Paris collected ten hits. Jeffries, Nemecek, and Solomon each collected
multiple hits for Paris. Paris was sure-handed in the field and didn't
commit a single error. Solomon had the most chances in the field with eight.
"Powered by Narrative Science and GameChanger Media. Copyright 2017. All
rights reserved." Any reuse or republication of this story must include the
preceding attribution. 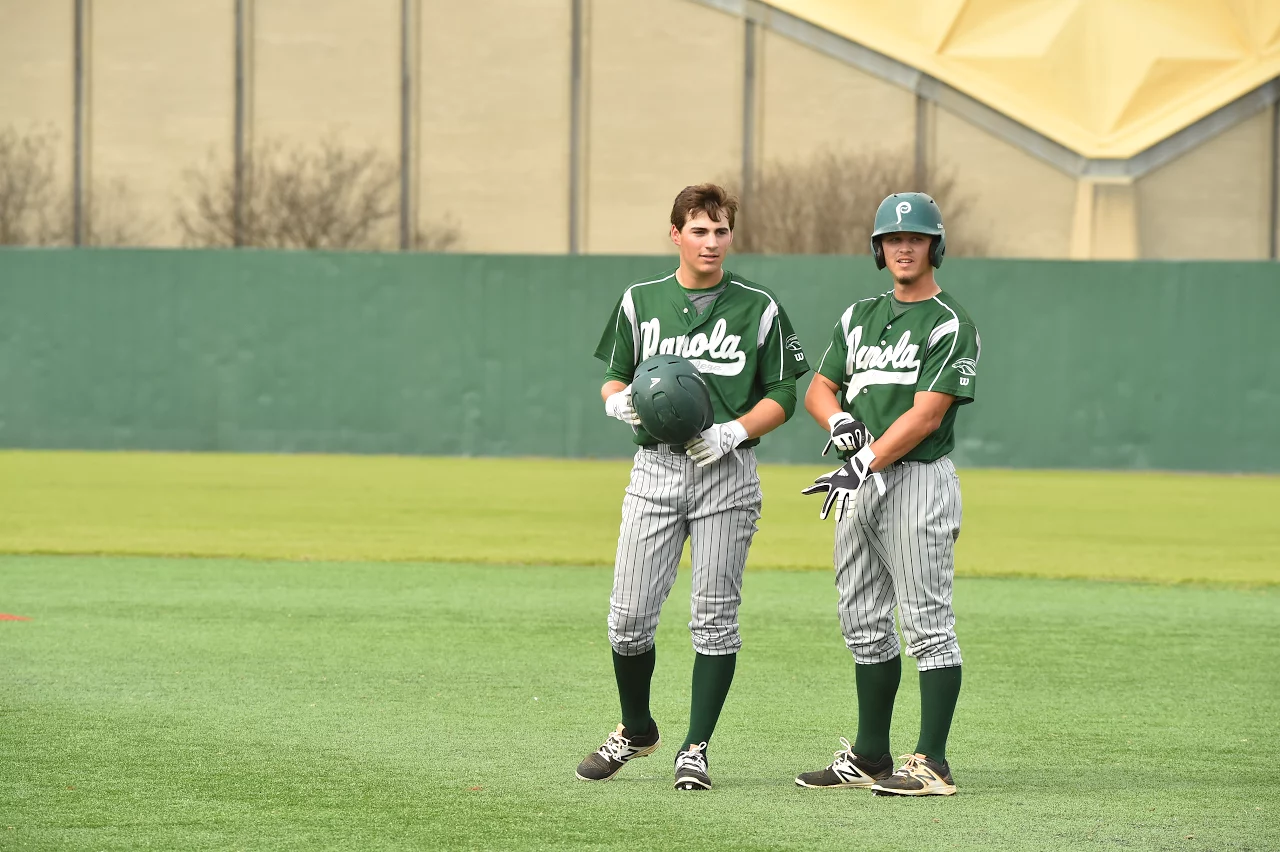 "Photo taken by - Craig Cain"  Picture of Sophomores Andrew Pace and Colby
Price, Both collected 5 hits in two games to complete the sweep at Paris
Junior College
Read All