Posted about five years ago by Ann Blackwell 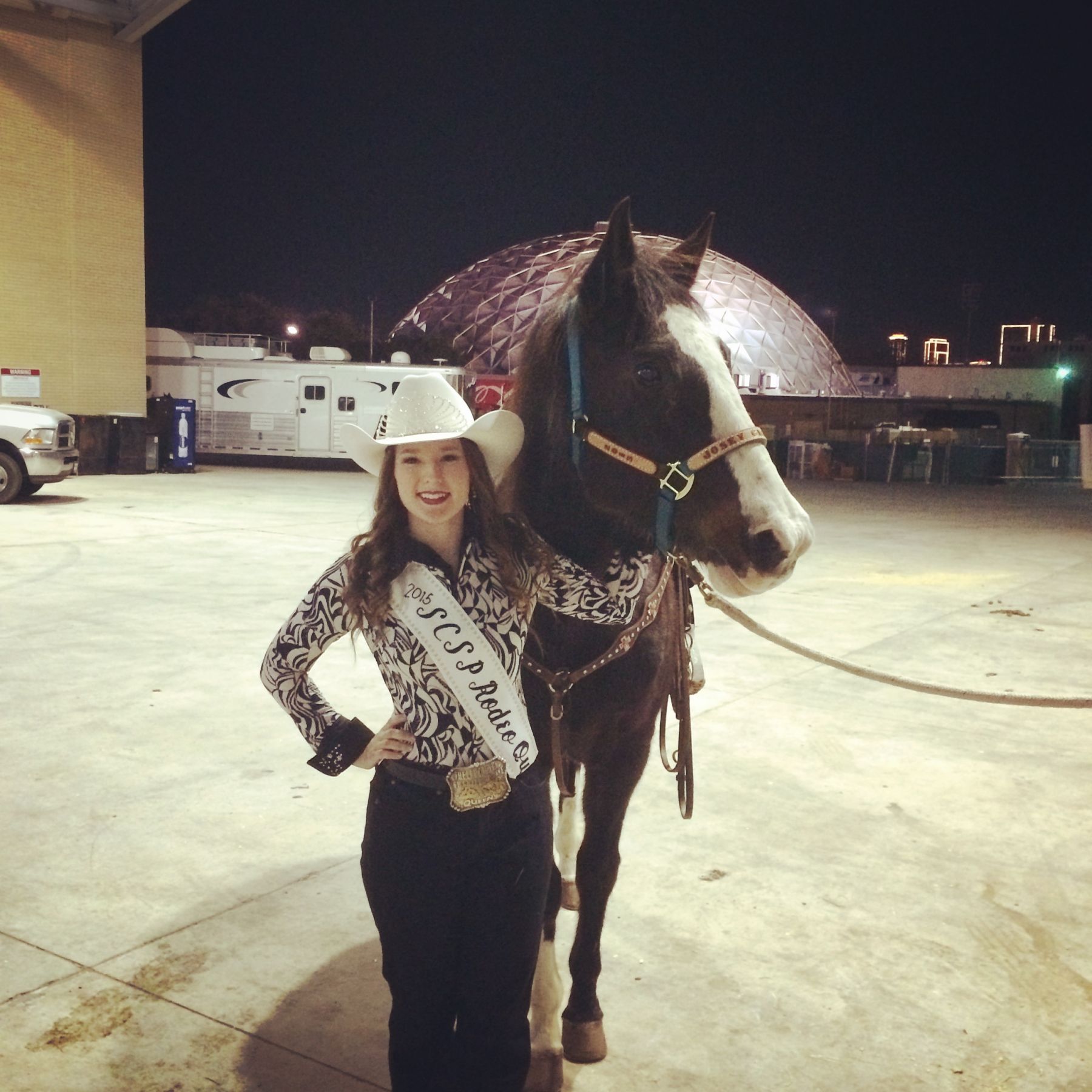 MORGAN PATTON
2015 SCSP Queen, Morgan Patton is also serving as the 2015-16 queen of the Joshua Rodeo team.  It was my honor to win First runner-up in the 2015-16 Miss North Texas High School Rodeo Association queen contest and Miss Photogenic/Personality.  A senior at Joshua High School, Morgan is president of the Joshua High School FFA team and the Vice-president of the Joshua Rodeo team.  In addition, she is a JHS varsity cheerleader. Morgan also represents her FFA chapter as a member of the quiz judging team and as a member of the Horse judging team. She earned the Equine Science award through her FFA chapter and had the privilege to represent the Horse judging team at state competition. She is a three year member of the National Honor Society.  Outside of school, Morgan enjoys training horses, barrel racing, goat tying and just recently trick riding.
After graduation, she plans on attending Weatherford College to complete her basic coursework before transferring to Texas A&M as a part of their College of Veterinary Medicine and Biomedical Sciences majoring in Equine Science.  With a degree in Veterinary Medicine, she hopes to open her own clinic.
2015 DUCHESS – CHEYANNE BARRETT 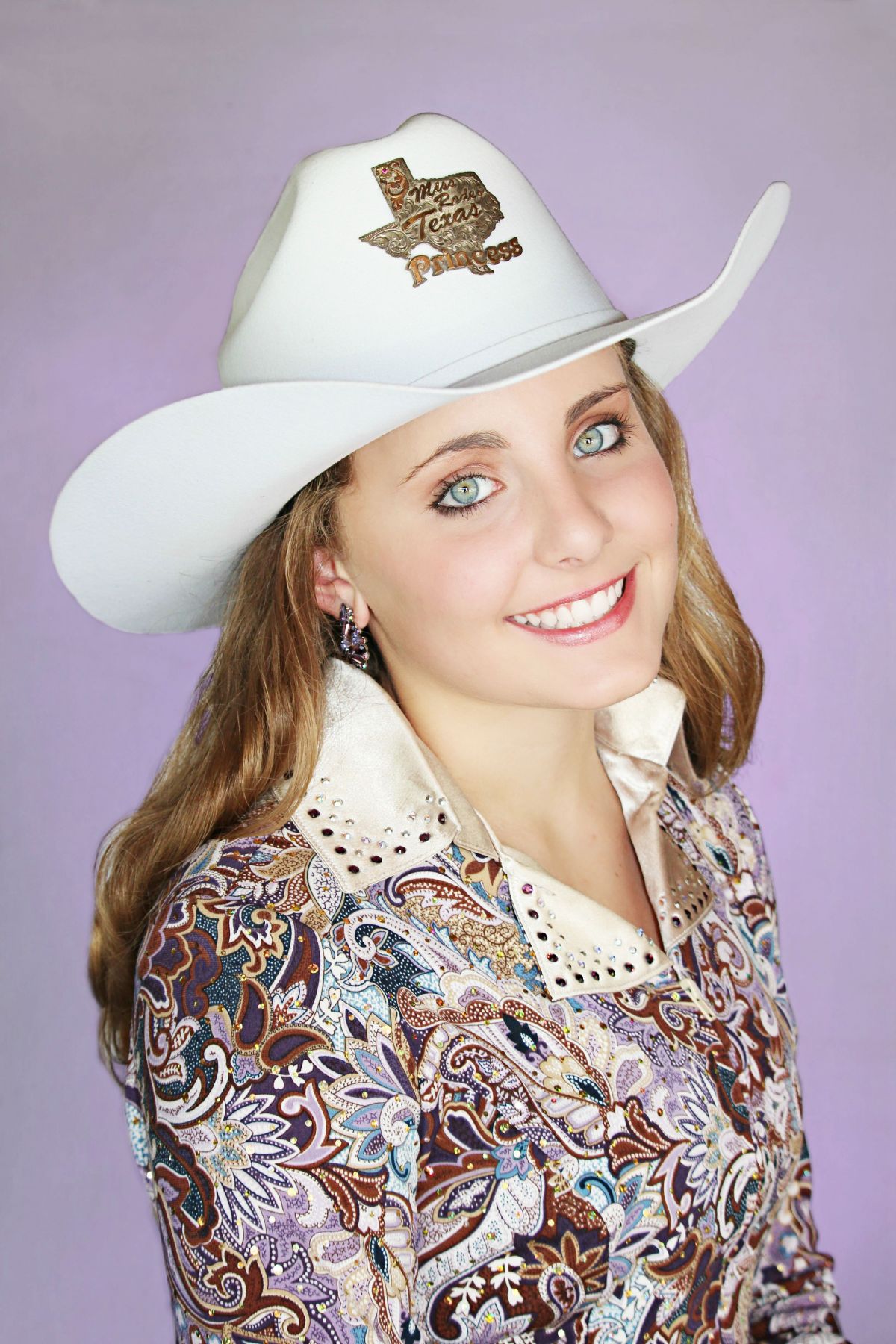 CHEYANNE BARRETT
2015 Duchess Cheyanne Barrett left Shelby County and travelled to San Antonio where she was crowned the 2015 Miss Rodeo Texas Princess July of 2015.  She won awards in Horsemanship, Photogenic, Appearance and Miss Congeniality.
She is 13 years old and in the 7th grade at Tarkington Jr High on the AB honor roll, participates in Band, Basketball and Volleyball.  Cheyanne enjoys hunting deer and hogs when she is not ridding her horses.
She is the daughter of Raymond & Chelene Barrett of Cleveland, Texas. She would like to thank the Posse for all their encouragement through her reign as MRTP.
2015 PRINCESS – GRACIE LEACH 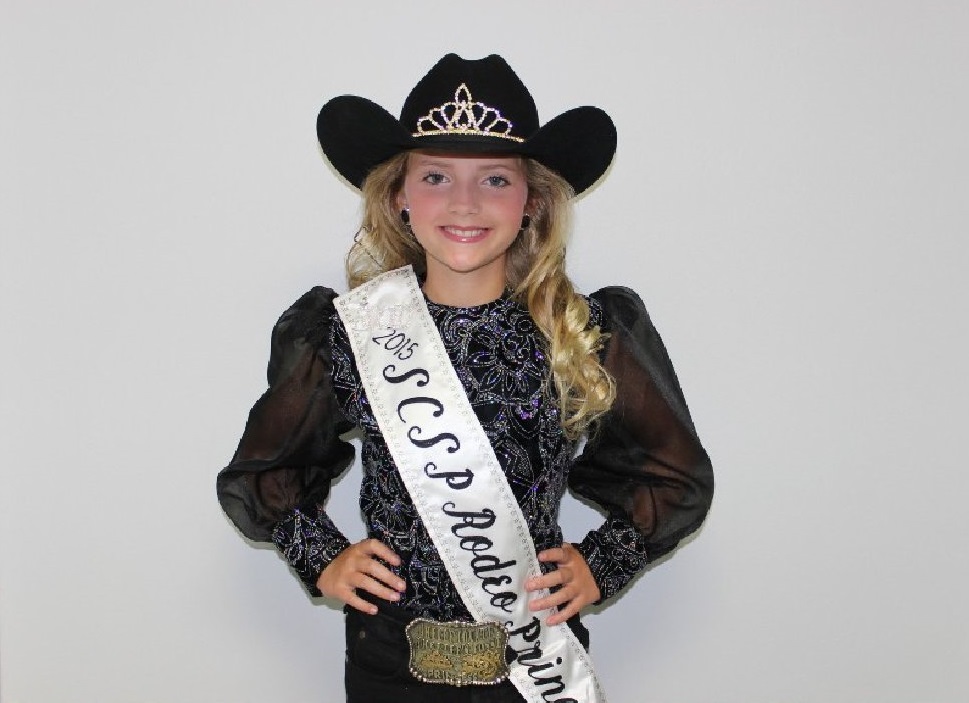 GRACIE LEACH
Gracie Camille Leach is the 11 year old daughter of Mark and Jennifer Leach of Shelbyville, TX.  Gracie attends 5th grade at S. W. Carter Elementary School in Shelbyville where she was elected as a student voice representative by her peers. She is on the honor roll and achieved advanced performance on her STAAR testing.  She is a member of the First Baptist Church where she was recently baptized.  Gracie was crowned the SCSP Rodeo Princess in June, 2015. She has been a very busy lady since that date. She is a member of the East Texas Equestrian Drill Team and has also competed in Play Days at the local rodeo arena.  Gracie is also a member of the Pineywoods Youth Rodeo Association where she competed and placed 5th this year in the girls breakaway roping.  She also takes gymnastics at Teresa’s Tumblers and is a member of the local competitive cheer group, The Crusaders. In her spare time Gracie likes to watch TV, hang out with her friends, play softball and she enjoys fishing when her schedule allows.
Gracie is the granddaughter of Mick Leach and the late Louann Waters Leach of Hemphill; and Joe Tom and Kathryn Schillings of Shelbyville, TX.  She is the great granddaughter of Zannie Gay Belrose of Sardis Community, Shelby County, Texas.
2016 CANDIDATES FOR SCSP RODEO QUEEN 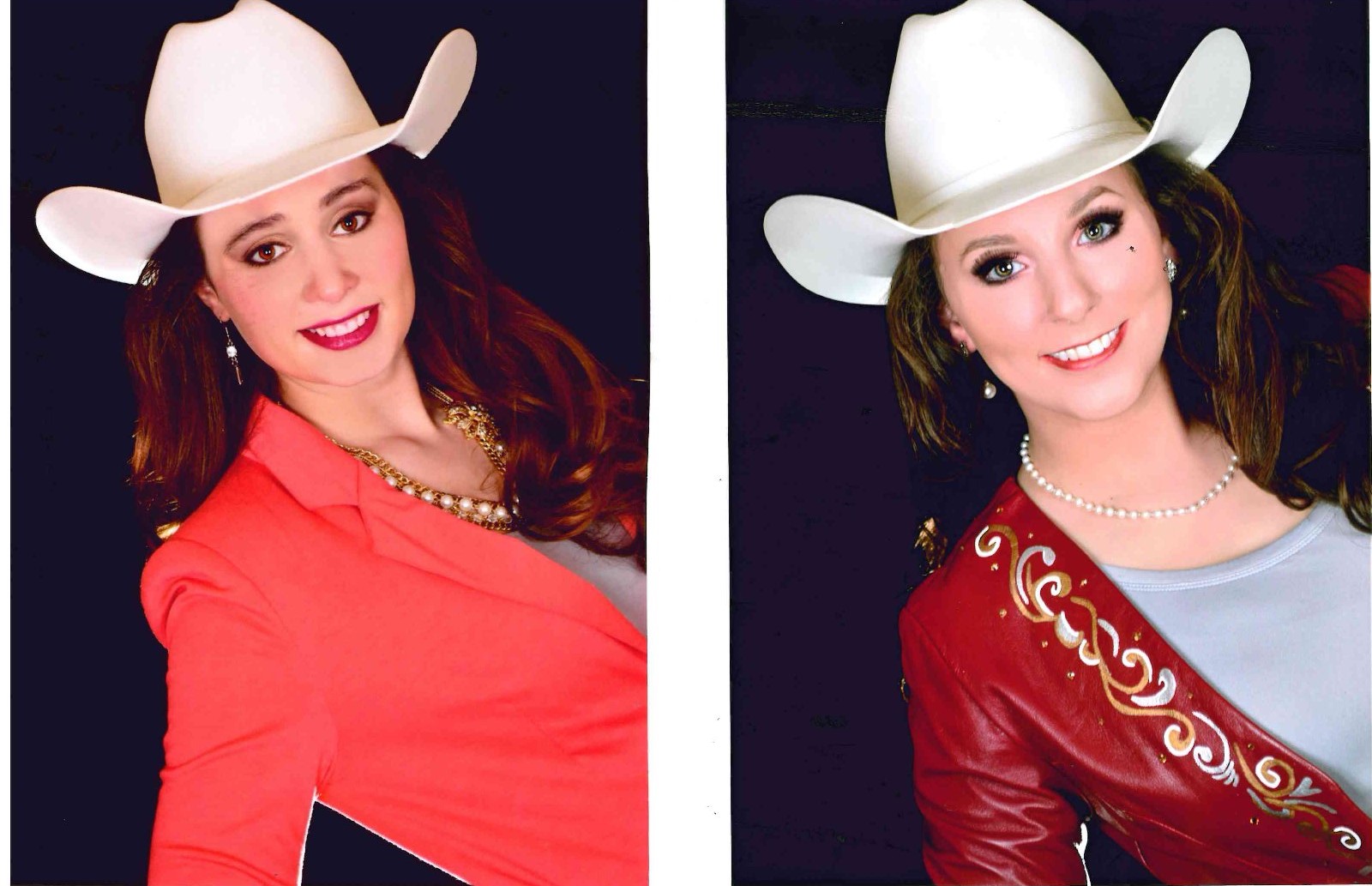 AMANDA CHMIELEWSKI & SHANEL WAGGONER
AMANDA CHMIELEWSKI – Amanda is 22 years old and a sophomore at Blinn College.  She is the daughter of Kerie Brookshier and Robert Chmielewski.  Amanda enjoys participating in speed events, barrel racing, queen contests and trail riding.  Amanda was Miss Congeniality and 2nd runner-up in the 2015 Shelby County Rodeo Queen contest, and the 2016 TCWW Sweetheart 2nd runner-up.  She was just recently crowned Miss Tops “N Texas Rodeo Queen at Jacksonville.  Amanda is sponsored by Performance Truck.
SHANEL WAGGONER – Shanel is a 21 year old Junior at Tarleton State University.  Her mom is Sheri Waggoner of Horseshoe Bay, Texas.  Shanel is a member of the Tarleton State Collegiate Stock Horse team.  She shows reining horses and competes in Stock Horse of Texas shows, but enjoys all styles of horse showing and is learning to team rope.  Some of her previous Queen titles include Miss Rodeo Jasper, Miss Panola County Cattlemen’s Association and Miss Cowboy Capital of the World ProRodeo.  Shanel is sponsored by Odell Quality Construction. 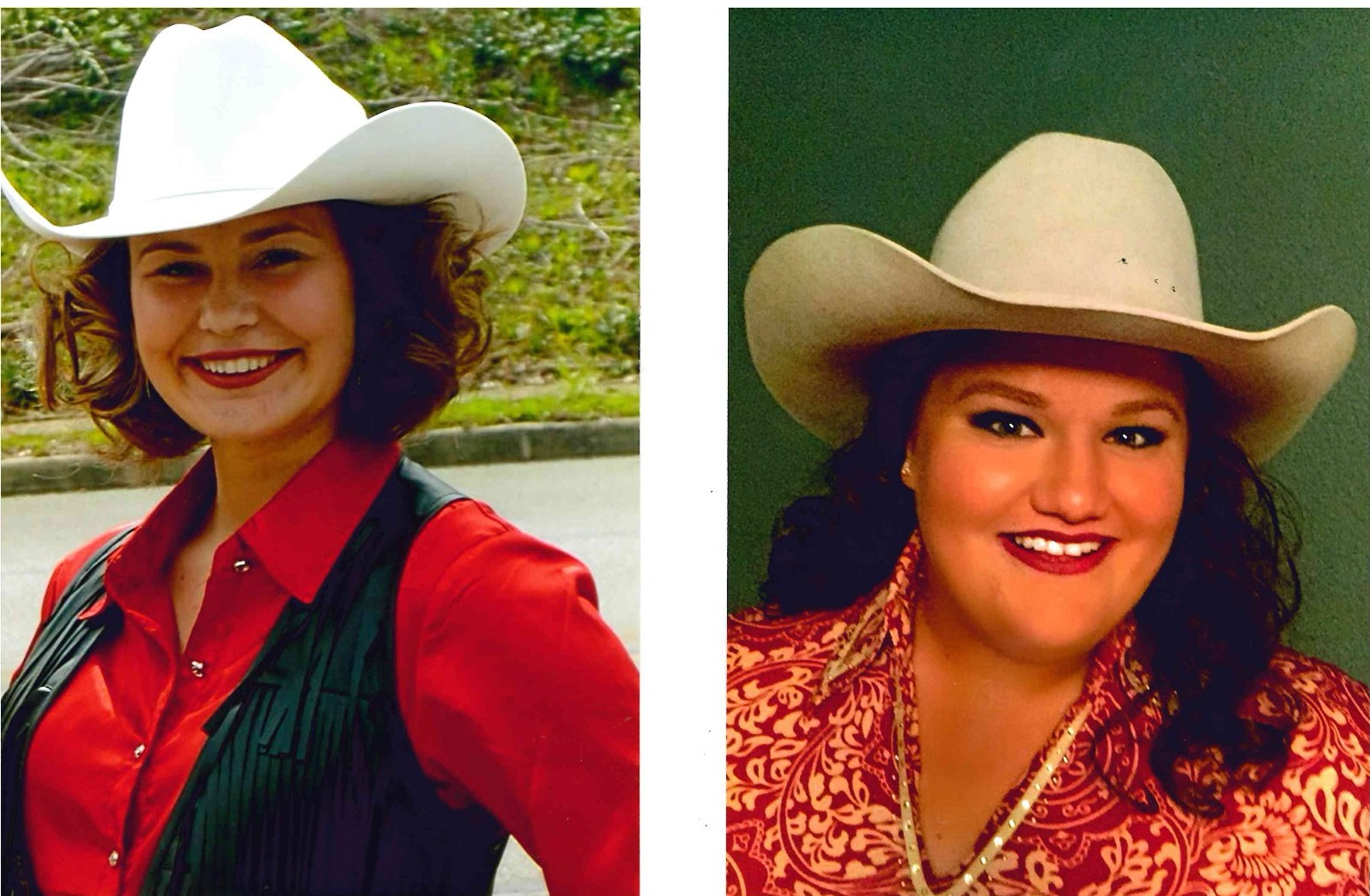 BRITTANY DAVIS & KYLIE TURNER
BRITTANY DAVIS – Brittany is the 18 year old daughter of George and Cindy Davis of Wallisville, Texas.  Brittany attends Lee College.  She was a member of the Anahuac FFA for 4 years and Chambers County 4-H for 8 years.  Brittany shows pigs, goats, chickens and horses. She was a member of the Chambers County 4-H Mounted Drill Team for 4 years.  She enjoys drill, barrel racing and helping out with her former 4-H drill team.  Brittany competed in the Jasper Lions Club Queen contest.  She is sponsored by her parents.
KYLIE TURNER – Kylie is 21 years old and a student at Lee College.  Her parents are Tammie and Colby Turner of Anahuac.  Kylie is on the Collegiate Debate team; she raises standard Australian Shepherds and is the Assistant Drill Master of her former 4-H drill team.  In 2012 she earned her Lone Star degree in FFA.  She was the 2011 Miss Trinity Valley Expo Rodeo Queen, shows in the Extreme Cowboy Association where she was a 2015 World Qualifier.  She works on her family’s cattle ranch and rides young horses.  Kylie is sponsored by Gore Propane. 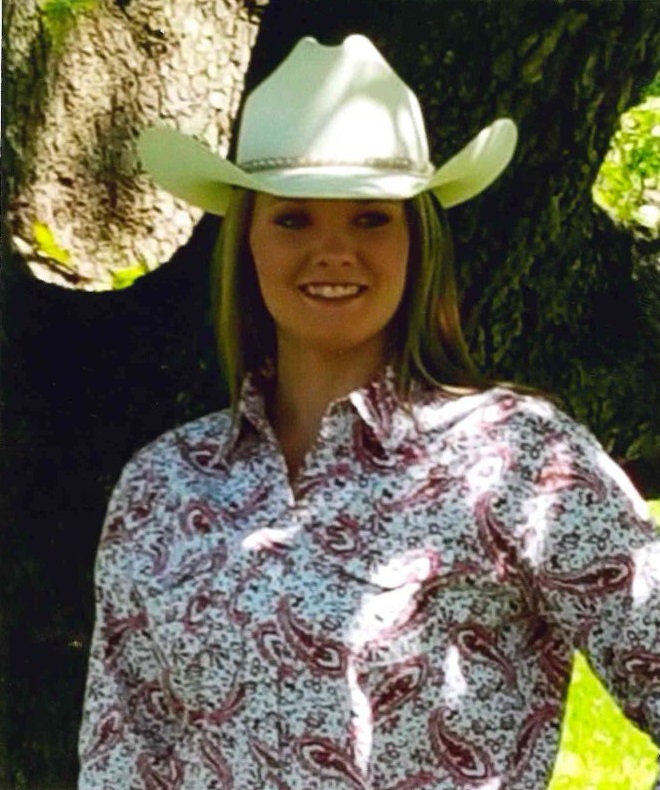 TAYLOR SNELL
TAYLOR SHYANN SNELL – Taylor is 17 years old from Cleveland , Texas.  She is the daughter of Stephanie & Randy Lovell.  She is a Junior at Hardin High School where she is on the AB honor roll and the distinct honor of being the only junior with all her school credits!  She is in the coop program where she spend half her day as a lifeguard at the Preserve of Texas.  She has participated in Queen contests in Liberty, Woodville and Cleveland.  She was Miss Congeniality in Liberty.  She is a member of the 2015 State Champ Liberty County 4-H Drill Team.  She is also a member of the NRHA.  Taylor is sponsored by MV-Performance Horse & Finley Feed and Tack. 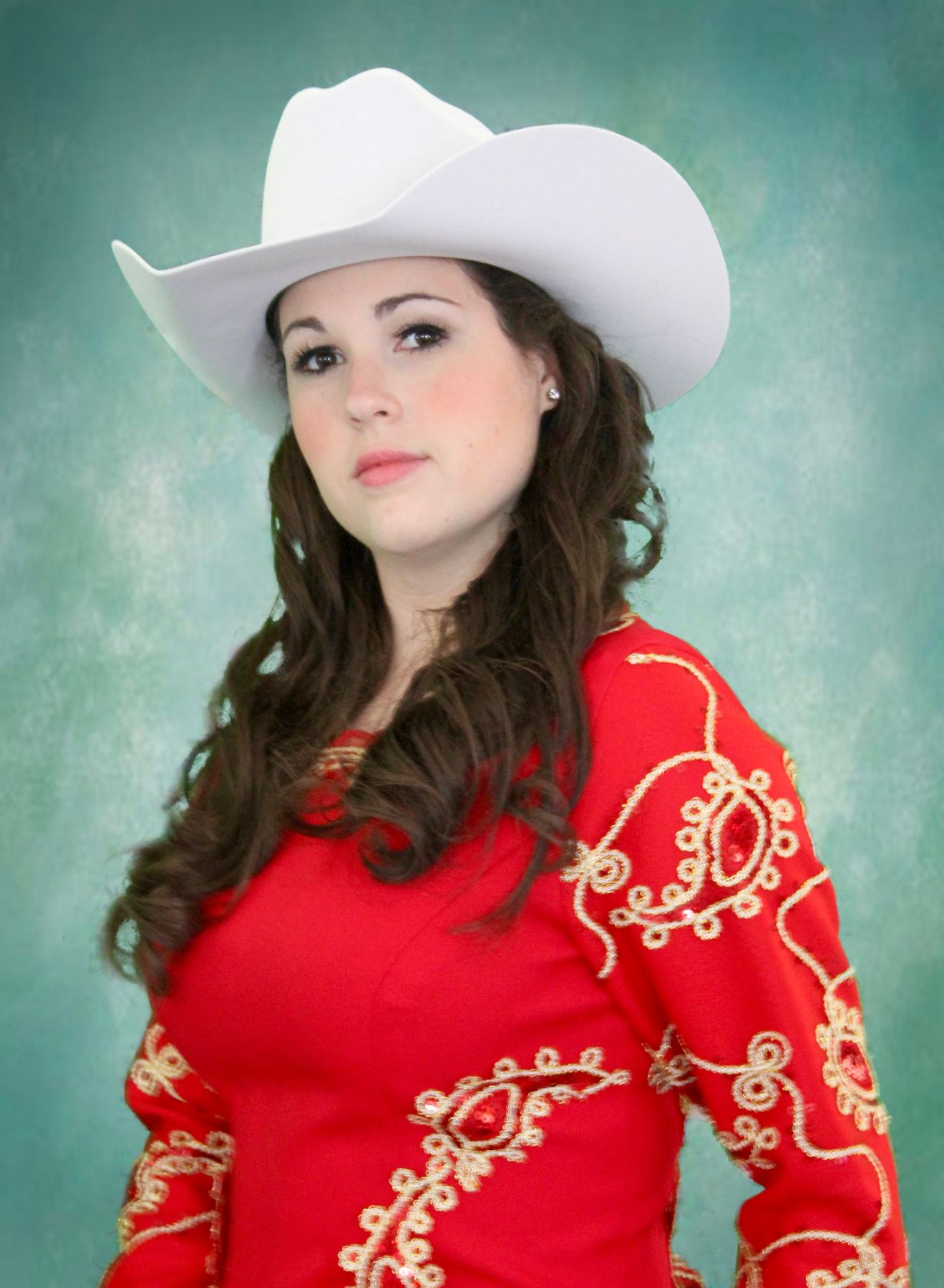 SCARLETT ADDINGTON
SCARLETT ADDINGTON – Scarlett is 22 years old and a Nursing student at Lonestar College – Kingwood.  She is from Dayton, Tx.  Scarlett is a member of the Phi Theta Kappa honor society, as well as secretary of the Student Nurse Associate for her campus.  Before college and nursing school, Scarlett enjoyed participating in stock horse shows and running a few barrels.  She really enjoys competing in Queen contests.  Scarlett’s parents are Susan and Brett Addington of Dayton.
2016 CANDIDATES FOR SCSP RODEO DUCHESS 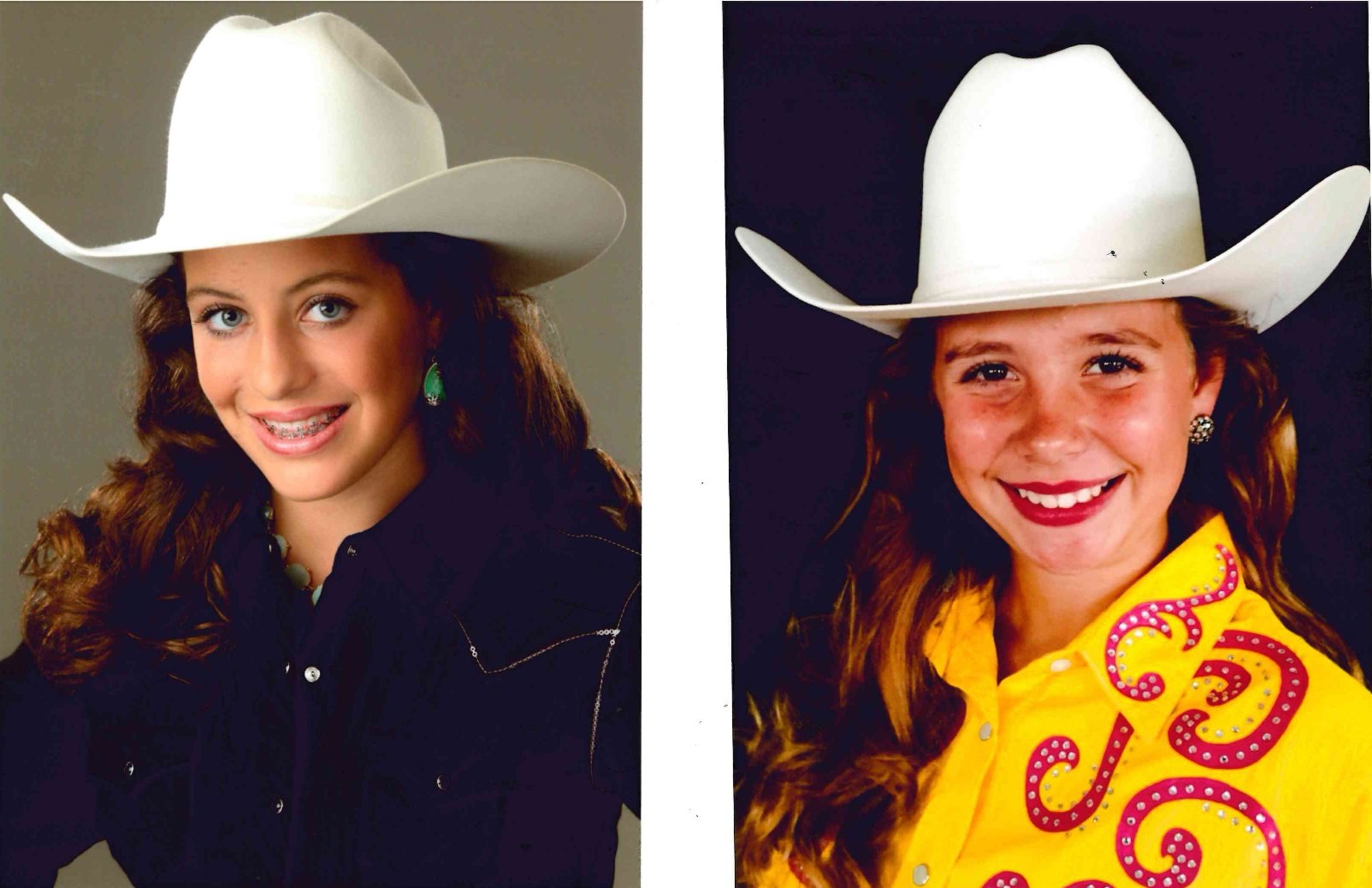 KENNEDY BUSH & ABIGAIL DEPRIEST
KENNEDY BUSH – Kennedy is the 13 year old daughter of Amanda and Charlie Bush of Center.  Kennedy is in the 8th grade at Center Middle School where she has been cheerleader for 3 years.  She is also on a competition cheer team for 5 years.  Kennedy is an honor roll student, BETA club, Band, UIL competition and received the 2016 Science award.  Kennedy is a member of the Shelby County Drill team and participates in the SCSP Play day series.  Kennedy is sponsored by Gaddy’s Medical Equipment and Supply of Center.
Abigail DePriest – is the 11 year old daughter of Colette and David DePriest of Tenaha.  Abi is a 5th grader at Baker Koonce Middle School in Carthage.  She is very involved the community projects for her school such as raising money for the Leukemia Foundation, Socks for Soldiers, school supplies, Christmas Angel Tree and canned food drive.  She received the Loyalty Award.  Abi is a member of the Carthage 4-H and was 2016 Panola County 4-H Reserve Grand Champion Broiler pen and 2015 Grand Champion pen.  She is a member of the Pineywoods Youth Rodeo Association where she was 2015 7-9 All-Around Cowgirl, 2015 SCSP Play day series All-Around Champion and 2015 2D Reserve National Champion in the Paint Horse barrel Racing Incentive.  Abi was recently crowned 2016 Tops ‘N Texas Rodeo Princess, 2015 TNT Miss Congeniality, 2012 SCSP Rodeo Princess.  Abi is sponsored by Cross D Ranch of Tenaha.
PRINCESS CANDIDATES 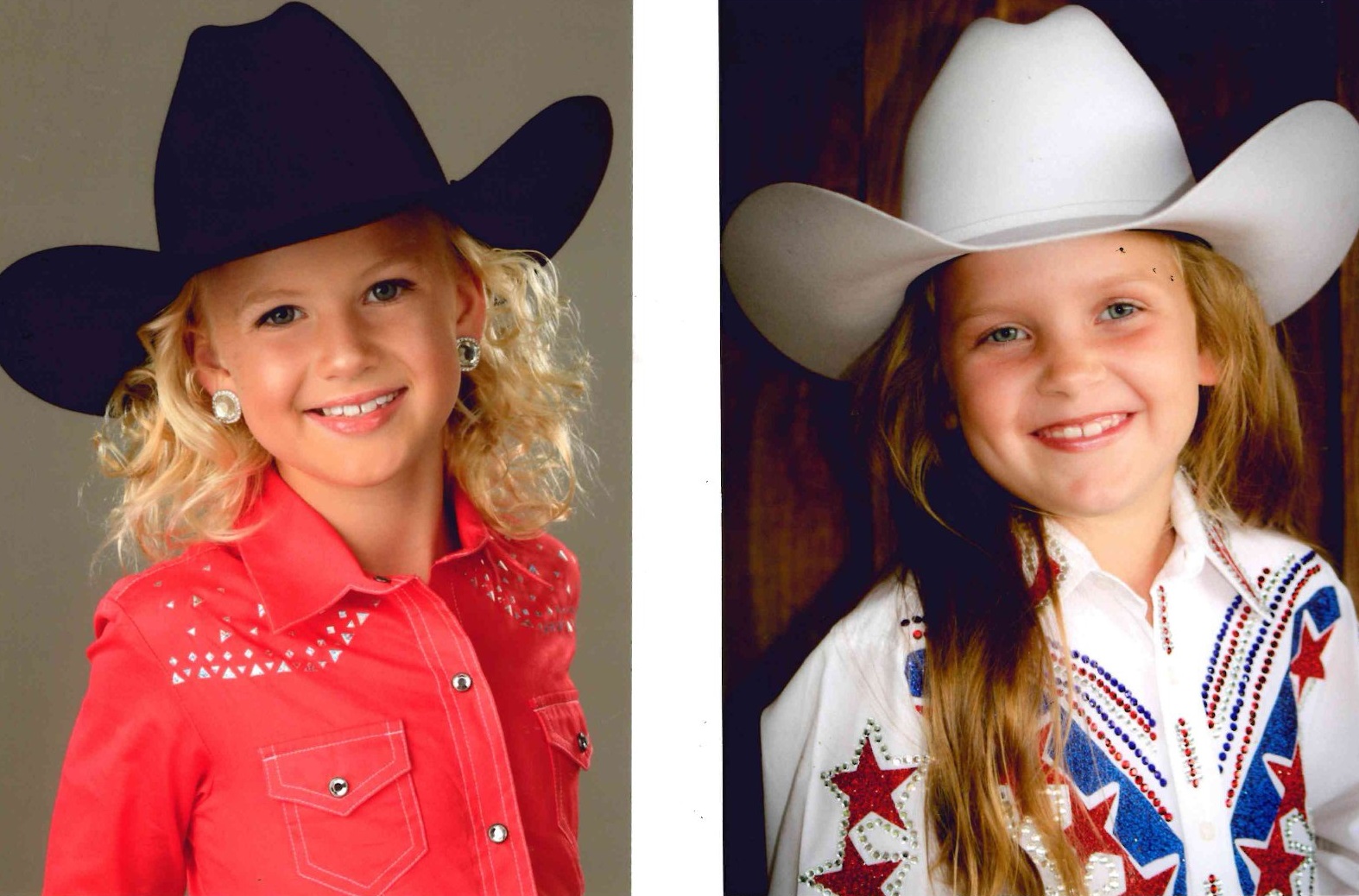 CAMBREE BUSH & LUCINDA DAVID
CAMBREE BUSH – Cambree is the 8 year old daughter of Colt and Collin Bush of Center.  Cambree will be in the 3rd grade at Center Elementary this fall.  She is an A honor roll student and received the 2016 Social Studies award.  She enjoys softball, basketball, gymnastics and cheerleading.  She has been on a competition Cheer team for 2 years.  Cambree is a member of the Shelby County Rustlers drill team and participates in the SCSP Playday series.  Cambree is sponsored by K3.
LUCINDA ROSE DAVID – Lucinda is the 7 year old daughter of Chance and Julie David of Joaquin.  Lucinda will be in the 2nd   grade at Joaquin Elementary.  She just completed 1st grade as a straight “A” student and participant of the Gifted & Talented program.  She finished the year setting a personal goal of 300 AR points.  Lucinda is a member and competitor of the Louisiana Stock Horse Association where she earned the 2015 PeeWee Division Year –End Championship award as well as the LASH 2015 Finals Champion and Reserve Champion titles.  Lucinda is a captain and 3 year member of the National Champion Rustler Drill team and competes in the SCSP Playday series.  She was the 2015 Panola County Cattlemen’s Association Rodeo Sweetheart.  Lucinda is the owner and head trainer at LR Performance Ponies of Joaquin, Texas.  She is a member of the AQHYA and hopes to one day participate in the AQHYA World Show.  Lucinda faithfully attends Fellowship Missionary Baptist Church where she sings in the children’s choir.  She is sponsored by LR Cattle Company. 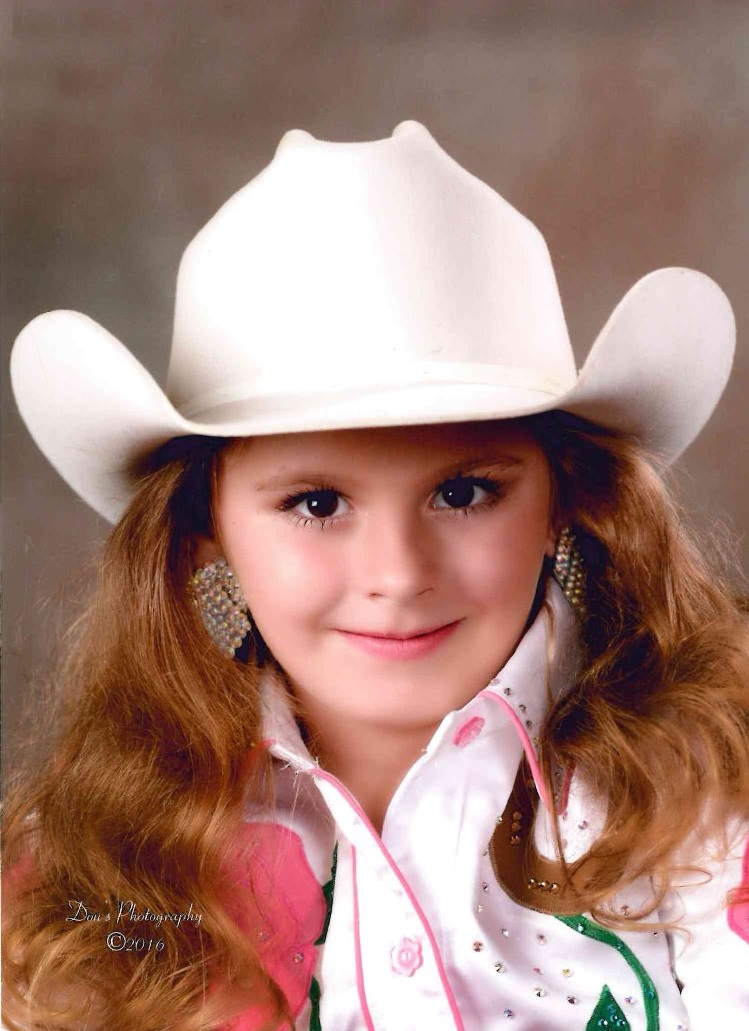