A San Augustine County man remains in jail on four state-jail felony charges, including unauthorized use of a motor vehicle, aggravated assault of a family member causing injury and two counts of endangering a child.

Baytown Police arrested 28-year old Kenneth Grimet two weeks ago on outstanding warrants in connection to allegations he assaulted his female cousin before he stole her car and fled, almost hitting the woman's two small children in the process in September.

The incident occurred on County Road 4400, and after hitting the woman in the face, neck and torso, Griment, who was intoxicated, allegedly slammed her face into the top of her car and a tree before fleeing the scene and almost running over an 8 and 10 year old child.

The car was recovered in Baytown. 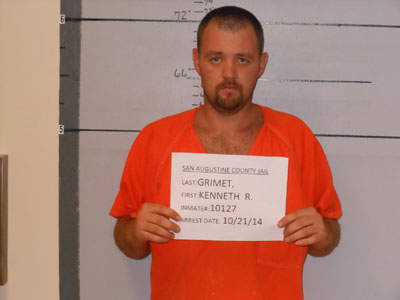