Posted About Seven Years Ago by Mangum FH 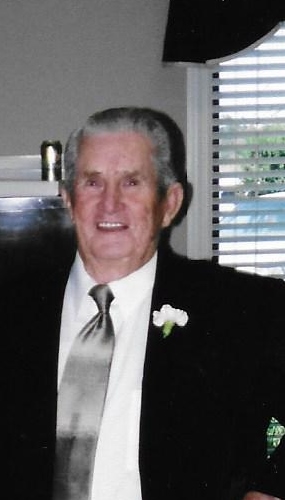 Felix McDaniel, 89, of Huxley, passed away Tuesday May 17, 2016 at Pine Grove Nursing Home.
Visitation will be Thursday, May 19, 2016 from 5:00 p.m. until 7:00 p.m. at Mangum Funeral Home. Funeral Service will be 9:30 a.m. Saturday, May 21, 2016 at Restland Funeral Home, Abbey Chapel in Dallas, Texas with Bro. Wayne Bickley officiating. Visitation in Dallas will begin at 8:30 a.m. on Saturday prior to the service, burial will follow at Restland Cemetery.
He was born March 7, 1927 in Edgewood, Texas to John Dawson “Shorty” McDaniel and Lillian Mae (O’Rear) McDaniel. He retired from General Mills in 1972 where he worked for 21 years. He  and his wife moved to Huxley where they owned and operated Huxley Bay Marina for 21 years. After selling the marina, he became a cattle man and farmer and loved to garden and grow tomatoes. He was a member of Lydia Baptist Church in Huxley and he was a member of Sam Houston Masonic Lodge in Shelbyville for many years and a Shriner for 52 years.
He is survived by:
Wife of 63 years:
Mrs. Bobbie McDaniel of Huxley
Many relatives & friends
Read All